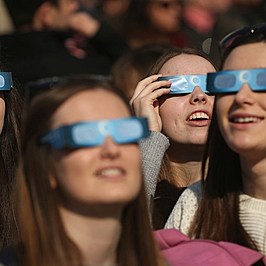 The last time a total solar eclipse was visible from the U.S. was about 40 years ago, on February 26, 1979. And it's been nearly a century since a total solar eclipse was visible coast to coast.  I was a senior in high school here in Billings.  Oddly enough I was in a broadcasting class at the career center during the eclipse.  To safely view the solar eclipse that will cut a dramatic shadow across the United States on August 21, you'll need a special pair of ultra-dark sunglasses.  The demand for these glasses has skyrocketed and of course that means scams have entered the market.

The American Astronomical Society (AAS) says buyers should be skeptical of glasses  even if they’re stamped with an ISO seal.  The organization also has a list of retailers that stock glasses made by verified manufacturers at some (but not all) of their locations. They include 7-Eleven, Best Buy, Lowe's and Walmart.  If you've already purchased a pair of specs, AAS has a tip for testing them out.

When you put them on, "you shouldn't be able to see anything...except the sun itself," the organizations says. "If you can see lights of more ordinary brightness through your eclipse glasses or handheld viewer, and you're not sure the product came from a reputable vendor, it's no good," AAS said in a statement.

The group also warns against using some eclipse-viewing home remedies -- such as sunglasses or wearing a welding mask.  Ordinary sunglasses are not up to snuff.  Just be safe. For Billings it will peak at 11;39am Monday morning.