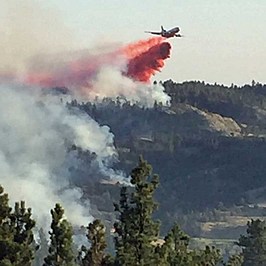 (Source AP) Fire crews from across the nation are arriving in Montana to help deal with a massive complex of fires that has already destroyed 12 homes.

Thirty-four states have sent firefighters and other resources as the total amount of farmland and rangeland scorched by the four lightning-caused fires in eastern Montana exceeds 350 square miles (914 kilometers).

Besides the burned homes, 50 others scattered across the rolling, open landscape are under evacuation orders. Ranchers fearing for their cattle cut open fences to let them escape as the fire approached.

With 18 large fires now burning across Montana, the National Interagency Fire Center says the state has more than twice as many large wildfires burning currently than the next-highest state, Alaska.

Gov. Steve Bullock has declared a fire emergency, which will allow the state to use the National Guard for firefighting efforts.